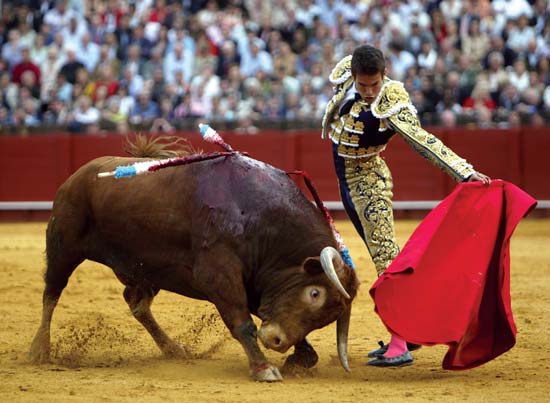 Ten days ago I watched a ‘bullfight’ in Jerez. We were there during the Feria. At the time, it was hard to process the experience of watching a bull slowly killed by a small group of men on a sandy floor.

The crowd are elegant. They wear suits and ties and elegant floral dresses. Those who sit in the sun have fans. People drink sherry out of small glasses. They applaud when the bull comes lumbering out.

It charges out of the gate. The first thing one notices is how much muscle it possesses. The whole body is rippling; the haunches creased with muscle that wobbles over his back. You notice its size. Most of the them are more compact, lower to the ground, than you’d expect. But they move fast. And stupidly. They have no expression. Dumb, is the word. They look around confused. They reach the edge of the circular ground. A man with a pink cape gets the bull’s attention. It moves towards him with trite gusto.

The ease  with which the man moves away from the bull makes one pity the bull immediately. We’re smiling at our superiority from the start. The picadors emerge. They weaken the bull. The armoured man on the protected horse emerges. He plunges a spear into the bull for ten seconds. He twists the spear in deep. The bull now is severely weakened. No longer does he run with gusto. He’s breathing deeply. His stomach contracts and expands greatly with each deep breath.

The picadors spring balletically towards it and plant decorated pins onto the arch of the bull’s neck. Blood seeps down his neck. The toredor spins the bull around him, to the joy of the crowd. The bull’s stomach is now wrenching fast.

Eventually he plunges a sword deep into a spot on the bull’s neck. I assume it carries through to the bull’s heart. If he misses the spot, the bulls stays alive. When this happens the crowd whistle. They do not approve of this. It is unfair to the bull! It is bad sportsmanship.

To me this ‘show’ of mercy to the bull seems absurd. The animal never had a chance in the first place. There’s no logic to their thinking. Sure, by hitting the spot you assure a less painful, drawn-out death. But you’re wounding the bull throughout its time in the stadium with the initial spearing and the pins.

The toredor eventually kills the bull. The crowd cheers. The bull lies on its side, tongue dangling. Sometimes its feet twitch as it dies. Horses come in with chains to drag the bull away. The trailing body leaves a smooth wide line over the sand as it is dragged towards the pen. Its feet remain taught. The banality of death.

I almost cried at times during the six fights we watched. The killing of animals was of course shocking in itself. But it would be hypocritical to oppose it while I eat meat, slaughtered in factories.

What is disturbing is we are paying to be entertained by the killing of animals. I looked across to examine the faces of the crowd and felt very alone and somewhat afraid. Like how I could feel sometimes on a dance floor when lots of people are on drugs.

And in a sense, what I was watching was the same. A kind of mass hypnosis. A sense that since others are there, participating, it’s ok. And my fears about human weakness came to the fore. Our hypocrisy. Our stupidity. The apparent ease with which we can legitimise something in numbers. Weakness in numbers.